Tom published this article on Linked In, in response to a recent CAF report:

The Charities Aid Foundation (CAF) has been performing a valuable service for 90 years by safeguarding philanthropic funds around the world to help charities build resilience, develop infrastructure and create opportunities for positive social change; in short, to act as a force for good. It’s also a valuable observer and commentator on the state of the charity world and civil society generally. Its latest report, ‘Corporate Giving by the FTSE100’, is very welcome. In a friendly and positive way, however, I’d like to suggest a few issues to bear in mind when reading the report. 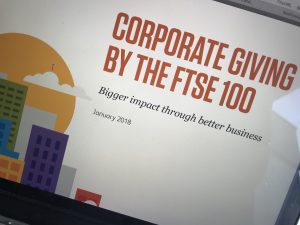 My concern is that the headline news, that corporate donations to charity are down by 26 per cent in cash terms since 2013, comes with far too many caveats. Since 2013, reporting of corporate donations to charity hasn’t been obligatory so, the report concedes, some FTSE100 members have ceased doing it. The report seems to imply that those not reporting (whilst others continue) have something to hide, but this need not be the case. The report again concedes that the donation of corporate cash to charities, when expressed as a proportion of pre-tax profits, has actually been going up: indeed, the trend line for this figure suggests it has doubled (from 1 to 2 per cent) since 2009.

It could therefore be argued that – relative to what they can afford – businesses are being more generous, not less, than they used to be. And this is over a period when the proportion of pre-tax profits being paid out to shareholders has gone through the roof – one explanation as to why wage growth has stagnated for a decade. Although charities have not fared as well as shareholders from corporate bonhomie over this period, relatively speaking they’ve done a lot better than employees.

CAF correctly argues a business case for companies to engage with charities:

‘Companies are increasingly recognising that they need to better demonstrate their value, both social and economic, to maintain public trust.’

Indeed, more than half of British consumers are attracted to companies known to support a charity. But there’s a danger of the pot calling the kettle black! According to the perennial barometer of trust, Edelman (whose report is cited by CAF), confidence that business can be trusted to ‘do the right thing’ is indeed falling, to 52 per cent at the last count. CAF doesn’t mention that Edelman’s figure for charities – at 53 – is hardly any better. Recent stories featuring Carillion and Oxfam will have done little to boost either of these figures.

Most worrying about the CAF report is that it assumes that engagement with charities is the only measure of a company’s ‘good’. It repeats the idea of support for and duty towards charities several times without mentioning the ultimate beneficiaries of such philanthropic activity. Perhaps, just perhaps, some businesses have found a better way of engaging sustainably with communities and the environment than through charities?

The report is based on a common means of assessing corporate engagement, the well established and respected London Benchmarking Group (LBG) Index, a measure of cash and in-kind donations and the value of work hours donated through employee volunteering plus associated management costs. LBG metrics are applied to FTSE100 reports even where the company has not itself adopted the LBG method. And that’s a problem: conscientious companies are increasingly concerned not about the inputs that they make to society but about their outputs, outcomes and impacts – the changes that their activity brings about. Although the LBG Index can be used to measure outcomes it’s essentially a measure of inputs – a situation reflected in too many corporate reports. Applying an outcome-based analysis – ‘What’s actually changing as a result of our actions?’ – is not only responsible in itself but may prompt the company to then ask ‘Is investment via a charity the best way to achieve this?’

The American Dell Foundation works with 700 charities worldwide. Each year it asks its partners ‘How can we best support you?’ Five years ago an overall majority said ‘cash’; today the biggest single reply was not cash, nor even volunteer hours and skills, but measures to develop leadership and impact. Even more pertinent, when asked where the source of ideas for impact and social change would be in the future 62 per cent said social entrepreneurs, 40 per cent said people living on the front line and only 32 per cent identified local voluntary organisations. Dell isn’t in the FTSE100 but if this change in emphasis, reflected elsewhere also, is happening in Britain then ‘Companies listening to beneficiaries’ may have contributed to CAF’s results.

If a company is looking to work with a government agency or a local authority it may be required to report on the ‘social value’ it generates. The Social Value Act is agnostic on whether such value should be delivered through a charity partner. But businesses that increase their investment in apprenticeships, reduce their carbon footprint, build a comprehensive relationship with schools can all claim to be delivering social value – without using charities as an intermediary. Such beneficial and positive engagement does not feature in CAF’s accounting.

Take Lifebuoy soap: in many parts of the world Unilever has reduced the size of the soap bar (along with the price) to deliberately make it more accessible to people on lower incomes. Alongside this, the company has been campaigning in high risk countries to raise awareness of water-borne diseases such as cholera. In those areas a lot of soap is given away but a lot’s sold, too – and lives are saved as a direct result. Although local charities do support the Unilever campaign they are not an integral part of it, so nowhere in the CAF methodology could this ‘good’ be recorded.

There’s no shame in companies admitting that boosting employee engagement (a route to enhancing productivity) can be a valuable outcome of engaging charities. But getting workers on board with the company mission and purpose isn’t just about words: it’s about workers realising that they and their work can ‘make a difference’, ‘change things’, even ‘deliver social value’. A bike ride or cake bake might create a team spirit and raise money for charity but it only ‘makes a difference’ at one stage removed, when the charity spends it. Employees who volunteer in company time (using company skills) can create more change in a child’s life, and feel a greater sense of involvement in that change, by working with them on reading skills than by any number of miles covered whilst wearing lycra.

So, panic not. The headline fall in corporate sponsorship of charities might actually be a good thing: it might reflect company ownership of their impact, evolution of their social purpose alongside their financial one, reflect a development of the values of the ‘company citizen’. We should not read this CAF report as saying that companies are moving away from facing up to their social and environmental responsibilities. 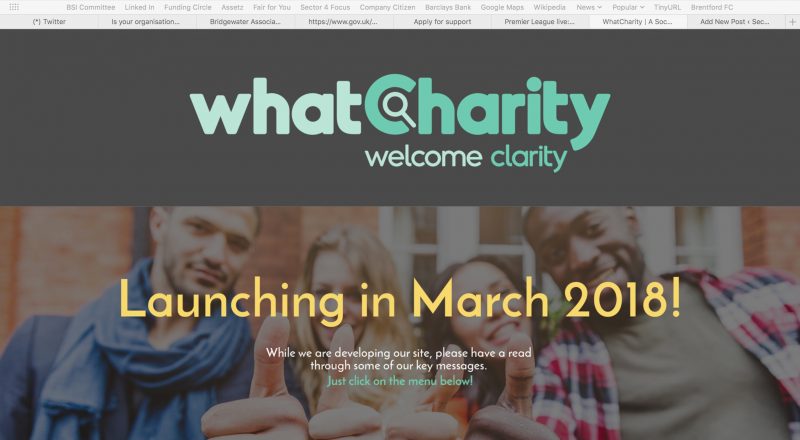