This article first appeared on the Tomorrow’s Company web site

‘Responsible business’ makes sense: there’s always something to be said for balancing your company’s needs against those of the environment and society in general. Why go against the grain?

This is the theme of my new book, ‘The Company Citizen‘.

For the CFO, there’s the knowledge that businesses which adopt more environmentally sustainable strategies produce more long term profit than those that don’t. The HR director knows that where employees are treated with dignity, and identify themselves with the meaningful mission or purpose of the company, then levels of engagement will be higher – which in turn enhances productivity. The procurement officer knows that legal and other codes of com 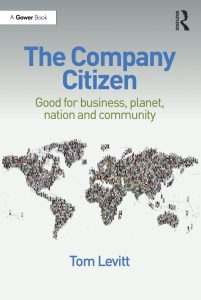 pliance are more readily accorded with when supply chains are open and transparent and the COO knows that ethical sourcing is a major contributor to removing unnecessary risk from their company’s portfolio.

When these four are happy so are the CEO and the Chair, who both know that the more they need to hide the less certain they can be about their future. Customers frequently show their appreciation of the honest, ethical, corruption-free approach by enhancing sales and market share.

Discussing his company’s newly-stated commitment to becoming globally zero carbon within a decade, a CEO recently told me: ‘This isn’t about climate change. It’s about long term thinking.’ How right he was. Putting climate to one side, carbon fuels can only become more rare, more expensive, more politically sensitive and their supply less reliable in the future; the same can’t be said for wind or sunshine, where technology costs are plummeting. A generational view puts the path of your company into perspective, puts budgeting for major projects in context and restores that business goal of years gone by: to leave a better company for the next generation than that which ours inherited.

In 1948 the United Nations came of age. It met in New York to discuss human rights, migration and other themes still redolent 70 years later. Today, if we brought together the 100 biggest economies of the world and charged them with resolving hunger, poverty and global warming only 58 would be countries – the rest would be companies. That shift in global power, recognised by the UN in the way it constructed its 2015 Sustainable Development Goals, suggests that combining global purposes with traditional business concepts of success is essential for our species’ survival; success must be tempered by a new level of responsibility. No longer confined to the optional extra of CSR, that responsibility could almost be described as epitomising the values of ‘company citizenship’.

Profit’s not a dirty word but it shouldn’t be the exclusive purpose of business. A true company citizen not only serves the market and the owners in a traditional way but pays tax willingly, with pride. The company citizen recognises that a business is a community in which employees, customers, investors and others have stakes which need to be in balance with each other. A good citizen’s a good neighbour, a community player and a friend to the environment 365 days a year, aware of both the positive and negative impacts that they have on others, seeking to accentuate the former whilst eliminating the latter.

The good news is that more and more businesses are finding ways to sustain themselves whilst maintaining the highest standards of ethics and probity, not least through the ‘new economies’ known as social, inclusive and circular. Business is increasingly looking to the longer term to reduce those negative impacts, especially on the environment.

When the day comes that it’s normal for companies to pay bonuses on the basis of carbon footprint reduction; boast in the media that they’ve eliminated slavery from their supply chain; go out of their way to limit top pay; take employees readily onto their boards; and abandon quarterly reporting, then we’ll know that we’re on the way to creating a society which includes company citizens and creates value for all.