In this article, Tom Levitt, author of The Company Citizen explores the use of social value and the frustration of measuring it. It appears on the City View web site. Tom will be discussing these issues at Commissioning and Procurement for Growth National Conference on the 27th March in London.

As a CEO in the social finance sector said recently: ‘More people are measuring social value than creating it.’ I understand that frustration – though there are certainly more of both doers and measurers than there used to be and that’s welcome.

Social value and impact have become part of the vocabulary not just of service delivery but of all activity in the three sectors, public, voluntary and private. 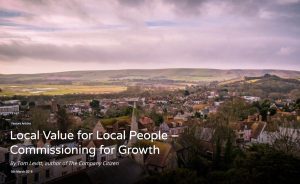 One very good reason for this is that having one eye on social value enables budget holders to deliver more from what, in the public sector, at least, are ever-dwindling budgets.

However, six years after the Social Value Act came into being, and more than a dozen since ‘Impact Investing’ became a thing, we still lack a common, agreed statement of principles, let alone a practical method of measuring and comparing the different ways in which organisations create change in society.

Whether their activity is social or environmental, implemented efficiently or otherwise, delivering outcomes against targets or simply assumed to be ‘good’, the need to measure is getting more imperative.

Essentially, the Social Value Act allows (but doesn’t require) local authorities to take into account the ‘social value’ a company delivers when considering whether to accept its tender for delivering a service.

This value can justify awarding a contract to a company if it exceeds the difference in value between that bid and the lowest bid by up to a specified proportion of the contract price, normally ten per cent.

There are thresholds and limits to the Act’s scope but those who make the most of it often set their own criteria.

The Act applies to all government agencies, with large councils the most likely to use it, some specifying which types of social value they want to see delivered by which contract.

Private companies such as Fujitsu voluntarily apply the Act’s criteria to their own procurement practices.

Defined by Social Value UK as ‘…the quantification of the relative importance that people place on the changes they experience in their lives’…social value is normally expressed in monetary terms, though the processes by which this is calculated are varied and somewhat arbitrary.

This makes it difficult to offset the value against the ‘bottom line’; hence the frustration. This is less of a problem for impact investors – normally high value, outcome-driven, corporate philanthropists – who tend to invest in large scale development schemes designed to deliver long term outcomes against specific goals with a readily measurable monetary value.

This wish to quantify non-fiscal outcomes is no longer confined to the charity and public sectors. As companies sign up to deliver the UN’s Sustainable Development Goals, or simply become more aware of the commercial imperative to be ‘responsible’ in everything they do, businesses need to take seriously measurement of the social and environmental changes that they cause.

From the global to the local: a number of councils around the country have taken social value to heart and its footprint can be seen in all of their activities.

Few have done this more intensely than Preston, a city both big enough for a policy of local spending for local people to have a real, observable and positive impact and small enough for that focus to generate a sense of local community and purpose.

There are inherent problems in achieving a common approach to recording social value, not least the intellectual challenge of comparing the value of different elements of change, which includes the emotional and intellectual reward gained by the people delivering it (social value is a strong motivator of employee engagement).

There’s a common failure to distinguish between outputs, outcomes and impacts, a shortcoming which too often results in the proxy measurement of inputs posing as outcomes: ‘my company delivered 10,000 hours of volunteering this year’.

Indeed, one recently launched ‘impact measurement tool’ is no such thing, pretending to measure change by combining a handful of quantifiable inputs.

This story illustrates what’s supposed to happen when employee volunteers turn up at a community centre with their paintbrushes: the input includes the hours of labour and the paint, easily quantified.

The output is a pristine wall of a calming colour. An outcome is that users show greater respect for and pride in their facility and the impact is that this contributes, along with many other factors, to reducing community tensions. As the chain grows in complexity the direct link between the hours spent painting (itself dependent upon volunteers’ efficiency) and any reduction in street crime becomes more tenuous.

Consider an organisation which helps teenagers at risk of entering gang culture: it provides them with support at school and counselling for their families.

Some of its operations are funded by a council contract, the rest through charitable fundraising. The council wants to see repeat juvenile offending reduced thereby saving money for public services.

A foundation wants to know how many children engage with the organisation and how community perception of young people has changed. A potential donor wants an assurance that the organisation isn’t spending excessively on administration, fundraising and running costs. And a local business has offered to provide work experience for some – though not those at high risk of offending as they pose an unacceptable reputational risk to the company (even though a positive outcome for them would create more social value than for those posing a lower risk).

There are four ways to arrive at a common approach to measuring impact or social value:

All of these approaches present challenges.

As for companies and government agencies, so for countries. GDP is an inadequate but oft-used measure of a nation’s worth, measuring as it does the value of commercial transactions (including, controversially, drug trafficking and prostitution) but excluding investment in education or culture and certainly not including the negative value of environmental damage.

Campaigners within the business world calling for ‘internalisation of externalities’ are growing in their call for negative impacts to be measured as assiduously as the positive, such that the currency of impact measurement (and, indeed, social value) should become a net figure rather than a headline one.

Perhaps the Social Progress Index or a system based on the Sustainable Development Goals should be the norm between nations? Can these myriad measures, this vortex of values, be rationalised or is a common system of assessing social value and the like an impossible dream?

In 2016 the British Standards Institution called together a variety of people interested in social value and asked us what we thought. There were broadly two camps: one believing that monetisation of social value was a goal in itself and the other that the solution was more nuanced, tending towards the fourth of the bullet point alternatives above.

Today, in 2018, BSI has established a committee of the willing to explore the practicality of a common framework and measuring system for social value, or net social change, or impact, call it what you will. We will look at the issue over 18 months and hopefully reach a consensus; part of our work will surely be to assess the different frameworks that already exist.

For example, I know of two procurement guides which allot unskilled volunteering time (an input!) a monetised common value, of £13 or £14 per hour respectively, deemed to be the typical cost to an employer of having the equivalent work done by an employee. But they disagree significantly on the value of pro bono professional advice, with one citing £25 per hour and the other £84.

Unravelling these knots is a challenge to which we must rise.

We need to alert businesses to the benefits of delivering social value in their everyday operations as much as we need charities to better report on what exactly changed as a result of their deployment of donors’ funds.

Meanwhile the public sector, always assumed to be the epitome of social value delivery, will not be reversing its shrinkage of recent years nor meeting society’s future challenges alone. Knowing what we change, for good or ill, and taking responsibility for it is both a start and a challenge for all sectors and organisations.

Find out more on this topic: