Tom wrote this review of ‘The Honourable Ladies Volume 1’  (Ed: Jacqui Smith and Iain Dale) for ‘Order Order’, the magazine of the Association of Former MPs, October 2018…

For review purposes I picked up this book of biographies of the 170 women elected to Parliament between 1918 and 1996 with the intention of focusing on perhaps a dozen examples from different backgrounds and histories. Despite its 650 pages I found I couldn’t put it down. 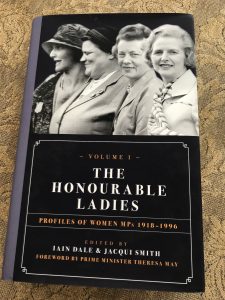 It’s a story of struggle for women both as a gender and as individuals. Some early pioneers had experienced poverty and hardship and only got to Parliament with the help of the trade union movement whilst others clearly carried a sense of aristocratic entitlement: several of these won by-elections caused when their MP husbands were ‘elevated’ to the Lords.

Missing in those early years were the middle class women from the professional classes that dominate politics today, reflecting Britain at the time. Not missing was passion: no woman was elected by accident, every one had a cause to fight although the tenure of some was but brief. I was intrigued to learn that a woman MP had raised the issue of female genital mutilation as far back as the 1930s.

The book is littered with ‘firsts’: we can all distinguish between the first woman elected MP and the first to take her seat, that bane of pub quizzes, and know that Betty the Tiller Girl became the first woman Speaker; but who were the first woman minister, cabinet minister or Privy Councillor? Another trick question: they were all Margaret Bondfield, a divisive figure in the Labour and trade union ranks, a friend and contemporary of one of my own political heroes, Frances Perkins, the first woman in the American cabinet (1933). Only 44 women have ever emulated Margaret to sit around that Cabinet table.

Virginia Bottomley’s review of Margaret Thatcher, inevitably a longer piece, is no hagiography. I read it on the same day as attending a talk about her by Caroline Slocock, the Labour-voting former civil servant and the only other woman in the room when Margaret Thatcher resigned at Cabinet. Different takes, but clearly describing the same person, the outsider who made it to the top. Outsider? Yes: a Methodist, a scientist, a woman… perhaps also a misogynist, who appointed just one female Cabinet minister, briefly, in all her years in power.

Even before WWII, when the proportion of women MPs barely exceeded two per cent, there was evidently already a cross-party sisterhood. After the war the Commons’ female population doubled but stuck at around four per cent for 40 years, not helped by women sometimes winning their seats off other women. It reached nine per cent in 1992, the last general election in this collection, before attaining the giddy heights of one third of all MPs in 2017, still 18 per cent short of the number to which a truly democratic system should aspire.

This is a wonderful book: eminently readable, a perfect late night diversion delivered in bite-sized chunks. Jacqui Smith and Iain Dale (the only male on the production team) have done a great job in celebrating very special human beings in a hugely sympathetic way, aided by over 100 female biographers who clearly enjoyed distilling those they greatly admired whilst no doubt becoming frustrated at what they had to leave out.

Reading ‘The Honourable Ladies’ was a pleasure although I’m far from finished, having deliberately left my friends and contemporaries from both sides of the House until last. I look forward to another 300 biographies from the 1997-2017 generation and then more beyond, women whose histories have yet to be made.